There is something endearing about homemade costumes. I’ve purchased my share of store bought ones for my kids but they never measure up to the crookedly sewn together fabric or to the painted cardboard box or to that ugly old tie and oversized shirt snatched from Dad’s closest. Last Thursday, the cadet/crossing guard at my daughter’s school stood proudly on her corner clad in what was either her adaptation of Cleopatra or the Statue of Liberty. Either way it was beautiful. She was beautiful for taking a white sheet and letting her imagination run wild.

At my daughter’s 2nd grade Halloween party this year a pint-sized Justin Bieber and Katy Perry showed up and for some reason this made me sad. Nothing against these celebrities—but second grade? Already? In my world, (pardon me while I don my Alice in Wonderland costume)  I wouldn’t see miniature celebrities, I’d see an array of princesses and clowns and hobos and superheroes and pirates. I’d see charmingly artistic combinations, like the cutie who dressed as a cowgirl riding a Pegasus.

And teenagers can come knocking at my door as long as they come in costume. Or at least put forth an effort. A sheet or a mask. A brown paper bag with cut out eyeholes. I’m not asking for much. Just something. But please don’t come scouting for candy devoid of costume; it just rubs me the wrong way. It just comes across as a little… entitled. Scary in a bad way. I’ve considered withholding candy to costume-less teens, I’ve thought about handing them a dried bean or a handful of rice or a penny, but I worry about getting my house egged. In our previous neighborhood, an elderly lady sat on her front porch and insisted her trick-or-treaters present her with a joke or a story. Then, and only then, they got candy. Children up for the challenge lined up, trailing off her porch and onto the sidewalk and even though neither one of my children ever gathered enough nerve to oblige her, I can’t help but smile at the woman’s gumption.

There are a limited number of years when it’s socially acceptable to knock at your neighbor’s door pretending to be someone else. And we’ll be bombarded with celebrities for the rest of our lives—I get my fill of Justin Bieber and Katy Perry and the like just standing in the checkout aisle. But you can dress up like a Pegasus riding cowgirl for only a short, sweet time. 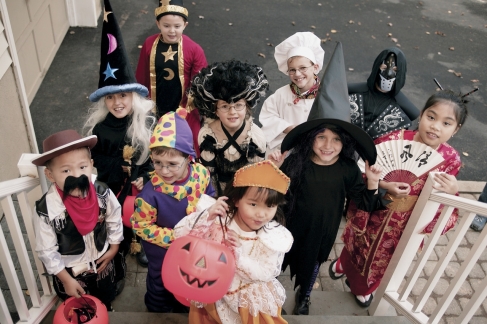