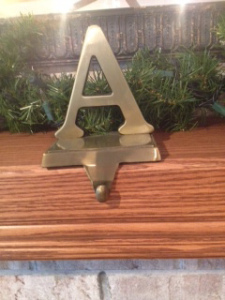 Hey hey! I’ve found the A! You may remember from last year…

I have lost the A in PEACE. The stockings are hung by the chimney in aggravation because my mantelpiece bears a typo:

So reads my stocking hangers. Rearranging them only renders further nonsense: CEEP. PEEC. ECEP. There isn’t much you can do without that A. I kind of need that A. Oh where oh where is that prodigal A? Somewhere in my basement, no doubt, to be uncovered when I’m packing up the stockings.

Decoratively speaking, I have been robbed of my PEACE.

Peace is an illusive thing. Almost indefinable. Is peace the absence of war and conflict? But what if conflict or war leads to ultimate peace?

And He shall be called… Prince of Peace.

Thirty some years later the Prince of Peace said, “Do not think I came into the…