Skip to content
A few years ago my husband and I spent a crazy 48 hours in Paris. We crammed as much cheese, bread, espresso and Parisian sights in as we could. A couple of those precious hours were devoted to searching for a dead man’s house. Why? Because the house belonged to one of my heroes, Victor Hugo. 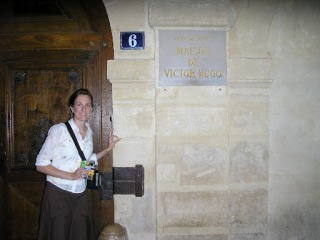 Actually, the house belonged to the man who created one of my Heroes, Jean Valjean.

I was a junior in high school the first time I met Jean Valjean in Hugo’s masterpiece Les Miserables. While the musical adaptation swept across Broadway, I was swept away in the French to English translation, rooting for, crying for, and living in the shadow of Hugo’s larger than life protagonist Jean Valjean. (Years later, I did get a chance to see the musical and yes, it’s stunning, but the book is…well… stunning-er.) Hugo stirred my affections for Valjean much like Harper Lee did for Atticus Finch in To Kill a Mockingbird.
And now I have a new hero: Josip Lasta. He resides in the pages of Michael O’Brien’s Island of the World.
I promise not to be a plot spoiler. The story follows the life of Josip Lasta, a boy living in the mountains of Croatia during World War II, and delves into subjects that, to my shame, wouldn’t ordinarily capture my attention. But put them in a story and I’m yours. I even goggled fascist ustashe, Tito, and Goli Otok, a communist “camp”.
Don’t let all this history deter you for the story is poetically, even at times mystically, written. It’s a tale of heartbreak and healing, pain and love, bitterness and forgiveness, possessing great truth without being preachy. A rare gem indeed.
Maybe O’Brien’s himself says it best…
“This novel cuts to the core question: how does a person retain his identity, indeed his humanity, in any absolutely dehumanizing situation? ….this novel is about the crucifixion of a soul – and resurrection.”
A word of warning. And an embarrassing one at that. I almost gave up on this novel. It took a good 100 pages for me to fully commit. (Did I mention it’s over 800 pages? I swear my biceps are bigger from lugging the thing around all summer.)
But since a dear friend highly recommended it, I pressed on. And man oh man, am I glad that I did. Because something huge happens, (the inciting incident in literary terms), and then you realize the details O’Brien so masterfully paints in the beginning of the story matter throughout.
Some books are easy to breeze through. Some are meant to muddle through, to digest slowly, to expose events and truths we’d rather leave hidden. But these are the stories that transform and shape our very thoughts.
Enough talk. Go read. And give your biceps a workout at the same time.