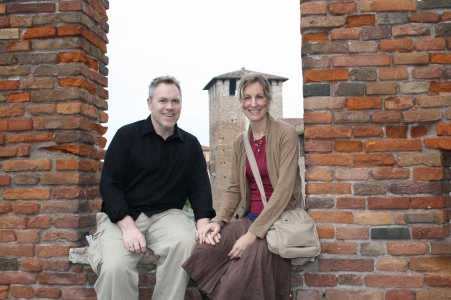 This is us four years ago. The autumn when my husband cashed in airline miles and booked a trip to visit friends in France without telling me, (which yes, is romantic, but also stress and argument inducing) and sold his blood–or plasma rather–to help pay for it. You might say we have a wee bit of a travel addiction, as proved by this picture. Taken in Italy because, I reasoned, if we’re going to be in Paris anyway, why wouldn’t we pounce on $80 roundtrip airfare to Verona? It would be a crime not to. Even if  Verona would only be ours for a mere 48 hours. Even if our Italian was limited to cappuccino and ciao! Even if we ended up on a dark street, at night, looking for the hotel I booked online.

Which happened of course. That’s when I wondered if the travel bug that had bit us was trying to kill us.

No phones. No signage. No map. No language. No open businesses. No clue.

And every person I spotted from a distance suddenly was a mugger, or worse, ready to prey on two very stupid, very tired Americans.

I think we prayed, I really can’t remember. I know we panicked. And lo and behold, seconds later, a missionary, from Cleveland, serving in Italy, showed up. Literally showed up beside us, jingling his keys into a nearby door. He offered to call our hotel for us on his cell phone. Patiently spoke with our Italian speaking inn-keeper. Made sure we ended up where we were supposed to be.

An angel in disguise? I don’t think so. But a providential encounter if I’ve ever had one.

You all know that vacation pictures, all pictures, only tell half—if that—the story. Sometimes behind the smiles are gritted teeth, held back tears, and racing hearts. For as fun and wonderful as trips and life can be, there is an equal measure, and maybe more, of anger, fatigue, and confusion.

Little did we know that God was up to something, that our experience then was laying the ground work for now. That he was opening our eyes to what it means to serve in Europe, not only through our friends living in France, but also through a stranger in Italy.

Little did we know that four years later we would be planning a transatlantic move, that life as we knew it was going to take a sharp turn, and while it’s exhilarating to be in the backseat of a car that takes a sudden right when you’re assuming you’re on a straight route, it’s also terrifying.

I’m thankful for our non-omniscience. I’m thankful we can’t see what lies ahead. Otherwise we’d all be freaking out all the time. I’m thankful for a God who lights up the path as we’re walking, following him. The same God who told Abraham to, “Go to the place I will show you.”

Sometimes it’s best to be content with the little that we know. It forces us to walk by faith, freak out less, and to, in due time, recognize the beautiful and terrifying tapestry God has been forming all along. And eventually we may utter in wonder, little did we know.